A view of Galilee from the Mount of Beatitudes

It saddens me that ‘pro-life,’ especially in the United States, has become a political term referring to one (or a handful) of attacks against the dignity of human persons.

Yes, abortion is a grave moral evil. As Catholics we are called to work toward ending injustices against unborn children, their mothers, and families. At the same time, to be ‘pro-life’ means more.

The Catechism of the Catholic Church rightly reminds us:

In the Sermon on the Mount, the Lord recalls the commandment, “You shall not kill,”and adds to it the proscription of anger, hatred, and vengeance. (2262)

The fifth commandment, as Jesus taught, regards any act which offends the dignity of a human person. Calling ourselves ‘pro-life’ Catholics means working to realize the fullness of Jesus’ teachings on this commandment. Christ said,

Do not think that I have come to abolish the law or the prophets. I have come not to abolish but to fulfill. Amen, I say to you, until heaven and earth pass away, not the smallest letter or the smallest part of a letter will pass from the law, until all things have taken place. Therefore, whoever breaks one of the least of these commandments and teaches others to do so will be called least in the kingdom of heaven. But whoever obeys and teaches these commandments will be called greatest in the kingdom of heaven.

Are we working to fulfill the “smallest part of a letter” of God’s law regarding human life? Calling ourselves ‘pro-life’ is not a political statement. It is a personal challenge and creed.

Our Contribution to Injustice in Jesus’ Homeland

On my pilgrimage to the Holy Land, I was moved to tears by the holy sites. There were also, however, many unholy sights there.

Most U.S. citizens are aware that Israel is considered our country’s political ally, and probably know that we contribute billions of dollars of military aid to that nation. However, most of us are unaware what our tax dollars are contributing towards in Jesus’ homeland.

It is difficult to explain in a short blog entry all that I experienced while there: the separation wall which separates Arab Palestinians from Israelis; brand-new Israeli homes built on land confiscated from Palestinian families, which had served as their source of sustenance; speaking with Israeli Jewish, Palestinian Christian & Muslim women involved in grassroots peace programs to end apartheid attitudes and injustices. I was devastated to see these injustices were happening where Jesus had reached out in love to people of all kinds. And that U.S. citizens’ money and ignorance are feeding injustice there.

A delegation from Caritas Internationalis (the confederation of Catholic relief and humanitarian organizations who work closely with Vatican offices), upon returning from the Holy Land in 2002, stated:

We wish to express our shock and sadness at the humiliating treatment of the Palestinian people at the hands of the Israeli Government. We experienced the gross violations of human rights, summary curfews, the erection of barbed wire fences around Palestinian villages, severely curtailing the free movement of people and economic and social life and now the building of a wall, higher and longer than the Berlin Wall, and the division of the West Bank and Gaza into what were described to us as ‘bantustans‘ with daily permits needed to go from one section to another. Indeed, the analogy with apartheid was often evoked. The delegation condemns the collective punishment of a whole people to avenge the violence of a minority of extremists.

Indeed, as pro-life people, we believe that Israel has a right to defend its borders against terrorism. Unfortunately, the state’s actions have reached beyond their rights, and have violated the dignity and rights of the Palestinian people. Israel has encroached on Palestinian lands, destroyed family farmlands, homes, schools, and community centers, and requires that Palestinians (but not foreigners, like me when I was there) walk through checkpoints on their own land.

Catholic Archbishop Elias Chacour is eight years older than the nation-state of Israel. He is Palestinian. If you ask him about the conflict, he will tell you – despite the suffering he and his family endured because of their Palestinian nationality – that everyone must forgive and love. Archbishop’s Chacour has said:

We Palestinians as a people do not believe in violence and in terror. The world, however, has dressed us in terrorist clothing and we need to be stripped so people can see we are human beings who are terrorized.

I point out the Palestinian-Israeli conflict because it comes from the heartbeat of our Christian faith: the Holy Land, where Jesus lived, died, rose, and from whence he ascended to Heaven. Let’s learn from Jesus’ sermon on the Mount of Beatitudes. Are we who call ourselves ‘pro-life’ truly challenging ourselves to carry out the full pro-life mission?

Respect for and development of human life require peace. Peace is not merely the absence of war, and it is not limited to maintaining a balance of powers between adversaries. Peace cannot be attained on earth without safeguarding the goods of persons, free communication among men, respect for the dignity of persons and peoples, and the assiduous practice of fraternity. (Catechism of the Catholic Church, pp.2304)

What do you think? Cancel reply

I am inspired by media, Catholicism, and Love Personified. My husband is my second-best friend (after Jesus).

Author of "New Media, New Evangelization: The Unique Benefits of New Media and Why the Catholic Church Should Engage Them." 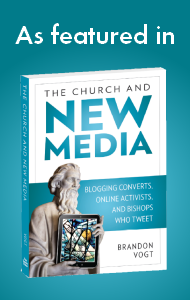